The Bulls Head is the oldest pub in Glossop and over the back door is a stone lintel which bears the date 1607, unfortunately covered over by a modern wooden verandah.
The name of the inn has two possible origins. Some people think that it originates from a Papal Bull of the 13th Century requesting that provision should be made for travelers in every township or parish. Others would contest that it originated from the bull baiting which took place at the wakes on nearby Castle Hill. The stump to which the bull was tethered is supposed to be still in the ground but covered by road surfacing.
In the bull baiting, the bull was fastened by a chain to the stump and the dogs set at it. The winner was the dog that held on the longest against the infuriated bulls attempts to get rid of its tormentors.
One of the first landlord's to be recorded was Edward Pickford who in 1801 shot 15 balls from a crossbow fired from the Bull's parlor window into the large window on the north side of the church. The court to hear his case was of course held in the Bull.
The "Modern" Bulls Head has a fine restaurant in the newly converted dining rooms.
The pub is a Robinson house and its very cool natural cellar helps to keep the bitter in fine fettle.
Although well supported locally it boasts visitors from all over the world .
On the second floor it has 4 modern en-suite rooms and dining room which have all recently constructed to give visitors to Old Glossop a fine guest house 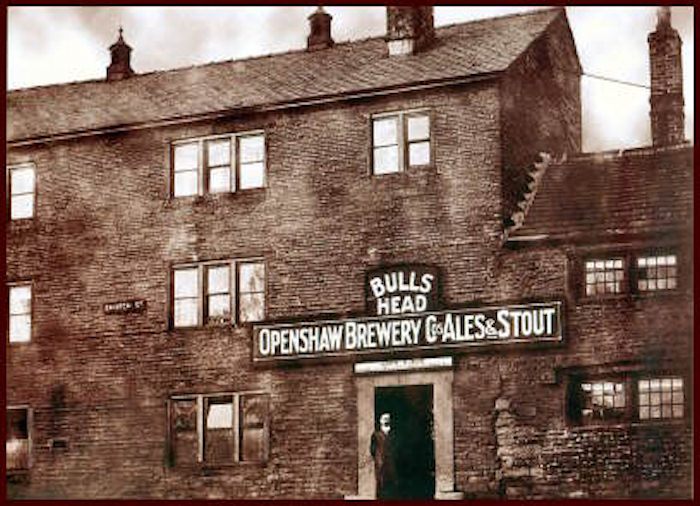 The exact age of the Bulls Head is not known. The two storied part is certainly older than the three storied part and dates from around 1600. In the low roofed drinking rooms of the "old inn"it is not difficult to visualize these dark deeds of mankind. It could so easily have seen tragic and long forgotten incidents standing on the fringe of the treacherous moorland paths that 200 years ago would be more forbidding than today.
Clear proof that ale was sold on the premises can be seen from a church wardens accounts item which reads "October 10th 1788 to Edward Pickford for ale for workers (working on the church) and others 3s. 2d" Another one reads " To 16 Quarts of ale for workmen 6s.8d" As the Bulls Head was the only licensed house, it was the scene of many interesting events. People came from Hayfield, Mellor and other places to be married and put up there. It was customary for marriage partners who resided at New Mills, Hatfield, Chiney and Bugsworth to proceed to the parish church of Old Glossop on horse back on which occasion the men and the women would vie with each other for the honor of running into the Bulls Head first. If the bride won the race to the top of Church Street it was supposed to be lucky a omen for future happiness

The trustees of the turnpike road held some of their meetings at the Bulls Head. The ratepayers refreshed themselves after their vestry meetings and it was the headquarters for the " Female Friendly Society" which was instituted on the 8th of Oct 1798. The members of this society met on the second day of January unless it was on a Sunday, then the first Monday after the 25th March, June and Sept. at nine o'clock in the morning, all subscriptions had to be paid before 10:30 am. at which time a procession was formed and they marched to church. After listening to the sermon for which the vicar was allowed 1/2 a guinea and the clerk 2s. they went back to the Bulls Head and dinner was served at 1pm. Fines on members were levied by absence and the stewardess was compelled under a penalty of 5 s. to visit every sick person within a radius of three miles.

In 1950 Mr. Leo Birt was the licensee, formerly an inspector in the Glossop Police Force, he possessed a box of coins, one of which showed Lady Godiva on the back of a Coventry halfpenny dated 1793, a half farthing, a sixpnce which was found in a goose and a Macclesfield halfpenny 213 years old. These coins belonged to Mrs Birt, 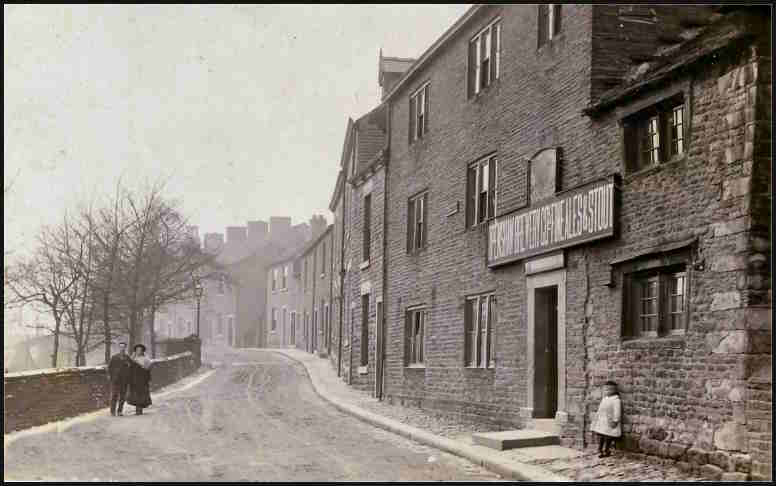 Upstairs were a few relics which have been handed down through the years, "Hand bells". These were the property of the Old Glossop Hand bell Ringers who won the English Championship at Belle-Vue. Manchester several times,
When they won it for the third time running a special medal was struck to commemorate the feat,
Their headquarters were the Bulls head, The bells were left in the Bulls Head in lieu of an unpaid debt and were still there in the 1950's
A Mrs Ester Pickford was still the landlady in 1825. A timetable of coach services for 1821 (before the small road was open) notes one between Glossop and Manchester, This was called the "Merry Tradesman" and left the Bulls Head on Tuesdays and Saturdays only at 6:30am. and arrived at Manchester at 11:30 am. The return journey started at 3:30 pm. and also took 5 hours. An old farm on Castle Hill was the coach house, The Bulls head was a place of some consequence as a hostelry providing accommodation for both men and beast when the only means of travel were either coach or horse back and in addition was the "Church Inn" for it supplied all the ale consumed by workmen at the church, when the provision of ale was customary at every job, and the wines used at the services. An old bill head of the Bulls Head contained the following items, eating, ale porter and tobacco, wines negus (a hot drink made of wine, water, sugar, nutmeg,and lemon juice). brandy rum gin, hay and corn beds outerboots, chambermaids, Obviously an important place of resort.
The gaunt walls of the parish church face the Bulls Head making it seem tiny by comparison, but the old inn keeps its secrets.

The name gives rise to mystery and inside the atmosphere remains. The pictures on the walls, the old oak beams so low that an average man can easily touch them, and the winding village street with the old cobbled footpaths add up the quaintness of the most fascinating kind. The landlady said she never tired of the view from her kitchen window. For over 300 years people have looked out and seen through air drowsy with the heat of a summer day cows on the hillside and thick foliage trees. Who could not want to drink in such surroundings when he came to the end of the road 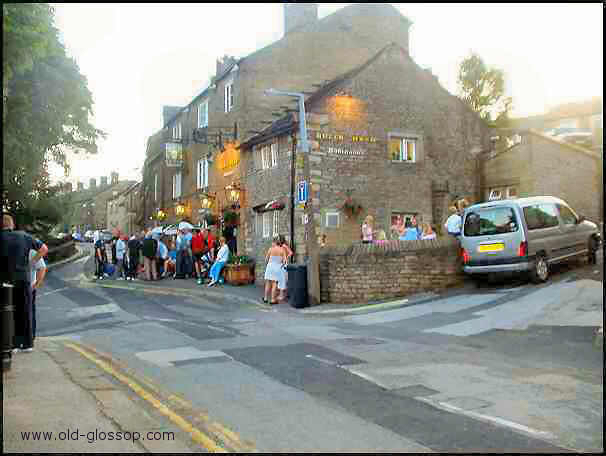 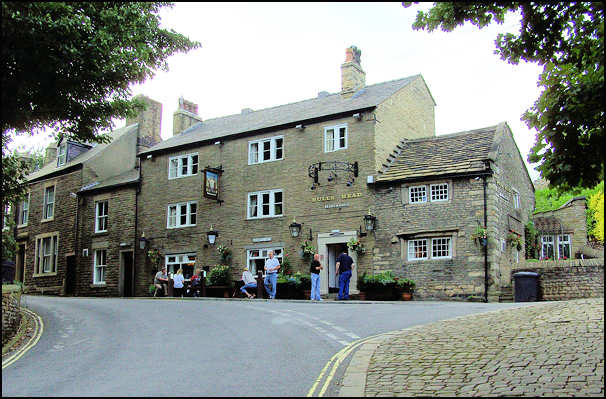